At around 10am on Thursday, MV Pragati Greenline-1 in Muniganj area of ​​Bagerhat fell into the river while catching a pigeon. Two teams of fire service and naval police have started rescue operations.

Shimul, the master of the lighter ship, said that when a pet pigeon in the ship fell into the river, Limon went down to pick up the pigeon in the river. At that time he was swept away in the river by the strong current. He tried to rescue her through a local trawler, but she drowned before reaching Limon.

The MV Pragati Greenline-1 cargo lighter ship left Chittagong port on March 18 and reached Bagerhat on March 19. The ship was supposed to return after unloading the wheat here.

Golam Sarwar, deputy assistant director of the Bagerhat Fire Service and Civil Defense, said a boatman named Limon had drowned in the river while fetching pigeons. Fire service divers are conducting a rescue operation in search of the missing boat worker. 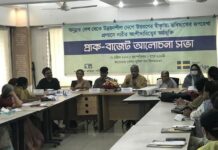