Two Chin resistance groups attacked junta troops who were leaving the Chin State capital of Hakha on Wednesday morning, killing five soldiers, according to a spokesperson from one of the groups.

The forces involved in the ambush were the Chin National Army (CNA) and the Chinland Defence Force (CDF), according to Salai Htet Ni, spokesperson for the CNA’s political wing, the Chin National Front (CNF). He said the clash occurred between 10 and 11am on the outskirts of Hakha Township, reports Myanmar Now.

“The latest intel we received was that five junta soldiers died in that clash. There were no casualties on the CNA and CDF side,” told Salai Htet Ni.

He added that several gunshots were also heard on Wednesday morning near Lungpi village in Falam Township, 40 miles from Hakha, but further information about what may have happened there was not confirmed at the time of reporting.

A displaced resident from Taal in Falam said that locals from his village and four others—Taal, Thlanrawn, Rialti and Lungpi—fled their homes when the shots were fired.

“The military still has not arrived in our village but we started hearing gunshots and explosions this morning,” the Taal resident said. “Everyone has fled. There wasn’t much rain today. We’re staying in the forests now.”

The Chin Human Rights Organisation reported on Thursday that Myanmar army soldiers had set multiple homes on fire in two Falam Township villages, torching all 13 houses and a church in Rialti and at least 10 homes in Thlanrawn. According to a Twitter post by the group, both villages are located along the Falam-Hakha road, where fighting between the military and the Chin resistance has escalated.

The Chin National Organisation, which formed in April, released a statement on Wednesday warning locals not to travel along the roads from Falam to Hakha and Rih, alleging that the military had been using locals as human shields in those areas.

Troop reinforcements have been sent to both northern and southern Chin State recently, suggesting that the junta has been preparing for intensified fighting, Salai Htet Ni said.

“I heard that this time, they are planning to eliminate us, so I think there are going to be some casualties. It’s very likely that a very serious battle is going to happen,” the CNF spokesperson said. “They’ve been preparing for it for a while now. I would like to tell civilians to be very cautious during their travels.”

There has been a junta-imposed internet blackout in all Chin State townships except Hakha since September 23, making it difficult to obtain timely updates from the region. 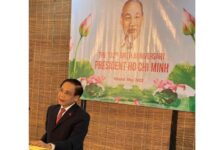