The students of the Pharmacy Department have been organizing this event to increase the senior juniors’ bonding for the last three years.

The game started on campus ground from Friday morning. Before the start, the guests and students paid tribute to the national anthem. Pharma Cavaliers was the champion, and Pharma Admirals were the runners up in this cricket game with a total of 6 teams including a team of teachers from the Department of Pharmacy.

Rabiul Hossain, Assistant Professor of Pharmacy Department, said at the prize distribution stage after the game, “The journey of USTC Pharmacy department is of many years. From teachers to senior juniors, keeping the relationship strong, maintaining exchange of ideas between them, such an organization is very helpful. Thanks to Banoful for the cooperation with our students in organizing such an event. to do.”

Abdul Motaleb, Chairman of USTC Pharmacy Department, was the keynote speaker of the event. He said, “Everyone wants to go back to their campus from the busyness of work and enjoy the life of a student. By organizing this cricket game, the current students gave their elders that opportunity, and organized a very nice event. Thanks to all the sponsors, including Banful, for being with us in such an event. 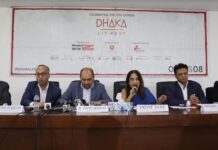