Prime Minister Sheikh Hasina on Monday directed the authorities concerned to roll out the second dose of Covid-19 vaccine from next Thursday (April 8) as per preschedule.

She made the confirmation while chairing the weekly Cabinet meeting, held at the Bangladesh Secretariat, joining virtually from her official residence Ganabhaban, reports BSS.

“The Prime Minister has made it clear to follow the prefixed roll-out plan for the second dose of Covid-19 inoculation scheduled to start from April 8,” said Cabinet Secretary Khandker Anwarul Islam while briefing reporters after the meeting.

Besides, the roll-out of the first jab of the covid-19 vaccine will conclude tomorrow (Tuesday), he said. Replying to a query, the Cabinet Secretary said there will be no problem with the stock of the second dose of the vaccines as Bangladesh will get the supply of the Jabs from India within the scheduled time.

Answering to another question regarding extension or end of the ongoing countrywide restrictions to stop the spread of fresh surge of Coronavirus pandemic, he said the government will review it on Thursday next and would take next course of action considering the situation. In addition, the Cabinet gave the final approval to the draft of Chattogram Port Authority Bill- 2021 keeping the provision of one-year jail or Taka five lakh fine as the capital punishment predominantly on charges of environment pollution.

“If anyone flouts the law, the person would be awarded with maximum one month to one year jail or Taka one lakh to Taka five lakh fine or both but depending on severity of his offences,” said Anwarul Islam.

The Cabinet also approved in principle the draft of Bangladesh Small and Cottage Industries Corporation (BSCIC) Bill, 2021 keeping a provision of one-stop service to ensure quick necessary infrastructural services in BSCIC Industrial Estates and to attract local and foreign investments there.

The amount of authorized capital has been increased to Taka 3,000 crore from Taka one crore in the draft law, said the Cabinet Secretary.

The punishment for different offences, which are related to the maintenance of 79 industrial estates, would be six months to two year imprisonment or Taka 10,000 to Taka 100,000 as penalty or both, he said.

If anyone provides false information, grabs boundary walls, land or hands over plots illegally, the person will face punishment, he added. 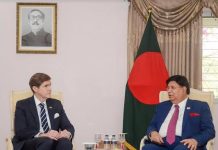