The last span (41st span) of the long-cherished Padma Multi-Purpose Bridge was installed on Thursday, making the entire bridge visible.

“The last span of the bridge was put on 12 and 13 pillars around 11:00am and with installation of the 41st span, a total of 6.15 km (6,150 meters) main structure of the Padma Bridge has become visible,” an official familiar with the process.

State Minister for Shipping Khalid Mahmud Chowdhury was present during the installation of the span. He also visited Mawa dredging channel this morning.

Earlier, Project Director of Padma Multipurpose Bridge Md Shafiqul Islam said that they are hopeful about setting up of the remaining last span by December, adding, “Then the main structure of the mega bridge will be visible.”

The Padma Bridge is the largest construction infrastructure since the independence of Bangladesh initiated by Prime Minister Sheikh Hasina. The construction work began in December, 2014 with government’s own fund.

The construction of the main bridge is being carried out by China Major Bridge Engineering Company (MBEC), a Chinese contractor Company, and the river management is being done by Sino Hydro Corporation of China.

Padma Bridge is expected to change not only the socioeconomic structure of southern parts of Bangladesh, but also create positive impacts on the whole economy of the country. It will also connect many countries of South and Southeast Asia and contribute to communication, trade, industry, tourism and many other sectors in various ways. 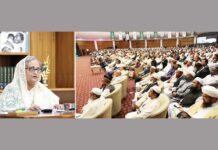 PM for resisting misinterpretation of Islam, cherishing its essence