Over the incident, the victim’s father lodged a rape case with Sarishabari Police Station accusing Kanak Hasan, 24, son of Saudi expatriate Abdul Kader of Loknathpur village on the day of incident.

Protesting the threat, family members and local people organized a human chain at Loknathpur village of Doyle Union on Garadoba-Moulvibazar road in of the upazila today (Thursday). They demanded immediate arrest of Kanak.

Locals alleged, Kanak used to stalk the girl on her way to the school.
On early Saturday (12 August), Kanak entered the girl’s room, tied up her mouth with a piece of cloth and forcibly raped her. When her parents came to forward from the adjacent room, Kanak fled the scene. But Kanak has not been arrested yet.

The speakers also alleged Kanak, a youth of influential family and his men are passing threats with dire consequences if the case is not withdrawn immediately.

Contacted, Mahabbat Kabir, officer-in-charge of the police station said since the incident, Kanak left the area. They are conducting drives to arrest Kanak soon. 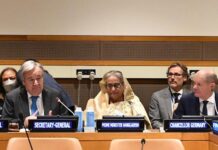 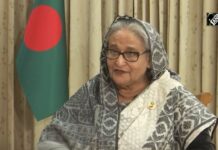