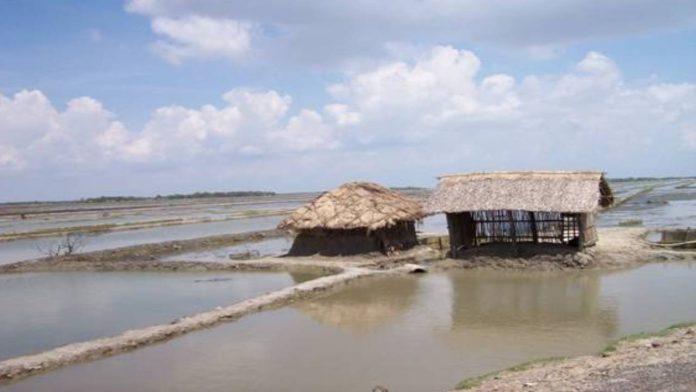 “How many times will I have to pay to frequent cyclones? What can I do to recover from financial loss? How can I remove this extreme salt from my shrimp farm?” questions by a man affected by leprosy in Bagerhat’s Rampal upazila, whose life was hit and devasted so many times by cyclones in his 50-year lifespan.

Gazi Mia (pseudo name used due to leprosy-related social stigma), leader of 7-member family, was first diagnosed with leprosy as a Pauci Bacillary (PB) patient in the beginning of 2021 and still taking MDT course with the help of The Leprosy Mission International Bangladesh (TLMI-B) partnering organization Christian Service Society (CSS).

In the meantime, Gazi’s wife informed him about another sad news. “Can you please check some skin patches on our son’s body, that appeared recently?” said Gazi quoting his wife. As soon as he noticed the same skin patches, he had, he was dumped again by ill-fate.

Multi-faced complexes of life including natural disasters have perplexed Gazi in finding hope while the COVID-19 pandemic has added more crises to the family of Gazi in the coastal district of Bagerhat.

Bangladesh is considered one of the most countries at risk of climate change effects while the coastal districts are most vulnerable to the adverse effects apparently twice and thrice a year.

Cyclone Sidr and Aila hit Bangladesh respectively in 2007 and 2009 leaving about 3500 people dead and 55,000 injured. Although Gazi managed to save his life during the two severe cyclones, he lost all of his belongings and all means of livelihood. However, the reality is life finds a way to bloom amid thousands of crises, thus Gazi found hope through the unspeakable struggle to rebuild the smashed house and devasted crops field and his only shrimp farm that was flooded with salty water. This depicts the resilience capacity of the people in coastal areas in Bangladesh.

“Frequent cyclones ravage all means of my livelihoods within a very short time of the landfall, the mad wind doesn’t take the roof only but take all of my hopes,” said Gazi adding that “I lost my belongings over eight times in the span of my 50-year life.”

“I heard about climate change on the radio during various programs after cyclones, but there are few steps taken to save my life and livelihood,” he said.

During an interview for the assessment of Climate Change Impact on life, Gazi said “I’ve never seen such extent of salt in water as it is visible in my shrimp farm this year. Salt creates light at night if you pick water.” I feel hopeless and under severe pressure to save the capital from my shrimp farm instead of making a profit from it, he added. Asked about his mental health status, Gazi said “The only pressure that has been chasing me constantly is excessive salt in my shrimp farm.” How can I remove this much of salt from water and save my farm? said Gazi adding that “We’re waiting for heavy rain that can be useful now.”

On the other hand, we’re suspecting our son as a leprosy patient as he got the similar skin patches, I had before my leprosy diagnosis, and it is a matter of great distress,” Gazi added.

Talking about the MDT supply for far-reaching areas, Gazi said “It’s really hard to bring MDT medicine from the Upazila Health Complex situated far away from here and it is really hard to go there crossing the dilapidated road.” He added “I’m not sure if I will get the medicine when I go or not. I’m bound to go two to three times crossing the road situation to get MDT.”


Roton Malo is the Advising Editor of The Daily New Sun and a development worker. He can be reached by Email: [email protected] Mobile: +8801720007244