Tamim went to Nepal to play in the Everest Premier League (EPL) as part of the rehabilitation process after recovering from injury.

But the Nepal campaign was not pleasant for him as the one-day captain of the Bangladesh national team had to return to the country due to a crack in his finger.

Tamim injured his finger while playing against Kathmandu Kings in the EPL eliminator round on Wednesday. He was hit by a ball of opponent pacer Jitendra Mukhiya on the thumb of his left hand.

However, he continued the game with the initial care but got out in the next over. After returning to the dressing room with pain, he saw that his finger was swollen a lot.

Therefore Tamim returned to the country without taking any risk.

“I returned to the country on this morning’s flight after suffering a finger injury in the last match. The finger is swollen a lot. As a precaution, I didn’t think it won’t be good to continue the game,” he said here today.

After returning to the country, Tamim had his finger scanned at a hospital in Banani. The scan report showed a crack in the finger. It is believed that he will take at least three weeks to fully recover.

After returning from Nepal, Tamim was supposed to play in the National Cricket League (NCL). He thought of playing at least three rounds to take a good preparation for the home Test series against Pakistan.

Tamim was rested after playing an ODI series against Zimbabwe last July. He pulled him out of the Twenty20 World Cup squad, citing lack of preparation. Then he returned to the cricket with EPL. However, Tamim did not have a good time for Bhairawa Gladiators. He has scored just 75 (12, 14, 40 and 9) runs in four matches. 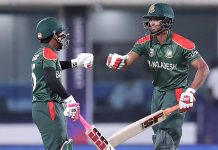