Forgiveness and an Overwhelming Reluctance

Riya never thought Shamik would change this much after the marriage. And that too right on the day after their wedding. Shamik calls shattered the tranquil night’s sleep. It was 7 in the morning.
—Get up, Riya! See what Maa is up to in the kitchen— go help her out!
More in an ordering tone Shamik voiced these words. Riya cannot make out what to do in this situation. In the first few days, a new bride is usually treated with warmth, wholeheartedly. Not that being born a girl she will never do the chores of a household; indeed, she will make her home like her own and do the housework too, but why is Shamik talking like that? It is okay for him to lie back and rest fair! Last night was all too stressful! She had to go to Dhanmondi for the afternoon makeover. It took almost 4 hours there. Then back home. Again, more time for wearing the saree and jewelry. She only had a sandwich in the afternoon. As arranged, she had to be at the community center at 8 pm. In most of the ceremonies, the bride and the groom usually arrive around 9 or 9:30! But Riya’s father did not want that, did he?! Riya had to be there sharp at 8 o’clock. Whereas Shamik and party- all came super late! They arrived at 10 in the night when the second batch had already finished dinner. What to do otherwise? The guests cannot wait till 10 at night! But Shamik, however, was never tardy. Whenever and wherever they went out on a date, Shamik used to come much earlier most of the time. Riya tensed up witnessing his delay in their wedding day! Compelled, she had to ask her friend Rina to look into the matter. Rina told me then- “I don’t understand why Shamik Bhai spoke so strangely.”
Grandmother said— forget what’d happened before; on the wedding night you’ll know your man, dear. However, it was 12, midnight, when we came home after finishing all the rituals- exchanging vows, garlands and rings, ceremonial sweets, looking at each other in a mirror, and the wedding dinner. The clock struck two when mother-in-law said goodbye, followed by the sister-in-law. Then the two, together, alone!
Riya thought they would spend the wedding night in stories all night long. But that wasn’t to happen, was it?
Shamik said all of a sudden— let’s go to bed!
Before Riya could say anything, Shamik laid down and pulled her to him fiercely. He wallowed into Riya like a wild man, for a long time. Not that Riya didn’t like that, but such shrill she did not desire. It was all there; she could feel the pain and the wavering pleasures! It all began with helping the mother-in-law out in the kitchen; gradually Riya had to handle all the housework. Shamik is basically a mama’s boy. In case of a moment’s inattention to his mother, the one she faces is a different Shamik. One day he even laid hands on her.
Shamik won Riya’s heart reciting Rafiq Azad’s “MadhabiEsei Bole: ‘Jai’”. Not that Riya had a penchant for poetry, but when she first heard those lines from Shamik,she drowned herself in a dream— drifting from the dream to an eerie sensation, and finally into madness.

Shamik’s mother was in a chair on one side and Riya on the other. Shamik was seriously injured in an accident. And Shamik’s wife died on the spot. His son could not be saved as well. Shamik is fighting for his life in the ICU. He was driving. It was a head-on collision with a truck coming from the opposite direction. What has been known so far is Shamik was primarily responsible for the accident. The test confirms there was alcohol in his blood.
Shamik’s mother now waits in the forlorn hope that her son might survive this if Riya could forgive him.
While asking for the bill, Riya was startled to see Shamik’s mother! The way she looked had not changed that much. But from what thoughts does a hard-hearted woman apologize to Riya today?
Shamik’s mother did not notice Riya as well when she went there to pay the bills. At first, she was a little surprised seeing her and then she burst into tears. Indeed, Riya could have been happy to see tears in her eyes. But could she? Is it so easy to forgive? Too many questions were swarming in Riya’s mind, too much of an overwhelming reluctance as well. At one point, Riya thought she would scream out— “You spared no effort to insult me. And now, why do you think that upon my forgiveness rests Shamik’s recovery?”
From dawn to dusk, there was only work! Nobody even thought of getting a maid! It was her dream to go in for BCS. “Maa doesn’t want you to get a job”, hearing this from Shamik, Riya was stunned into silence.
— What on earth are you saying, Shamik?
— I said precisely what you heard!
—Shamik we had an understanding…
—Forget what we had! Now you are my wife. And that’s it. What we, especially my mother, say is final.
—That’s it! I’m leaving for home tomorrow!
—You can’t go just because you wish for it!
—I’ll be going for sure!
—No, you can’t.
—I will go!
—You can’t, and that’s final!
Shamik rushed out, without any heed to hear anything anymore. And today he is in the ICU, battling with death. And his mother, sitting before
Riya, asking for her forgiveness. Riya could not figure out what to do now.
—Look, this is a hospital. Please don’t be like this. I’ve asked for our best in neuro. And I hope Shamik will come through.
—Shamik won’t survive if you don’t forgive! Tell me that you forgive him!
Shamik’s mother stood there, holding Riya’s hands. Riya felt really embarrassed.

3
Today Shamik was taken away from lifesupport after four days. He had already died but his mother kept waiting. Why? She loved her son a lot. Also, the son was very attached to his mother. Between them, Riya was nothing more than a wind-up toy. Still, Riya does not know how Shamik changed this much after their marriage. In those days of maddening love, they would talk on and on about their plans, their own careers and what not! But Shamik said nothing about his mother back then! It does not matter to ponder over whether or not Shamik’s mother had consent for the marriage, even if she did not, why did she or Shamik behave so rude? Why did the marriage have to happen at all then?! Not that Riya had not been troubled by these questions. But she did not find any answers then and it is completely irrelevant to get some now! Roya came across another question: how was Shamik’s present wife, now late, treated by him and his mother? Not even a year passed for Shamik to get married after him and Riya split up. Riya came to know about this from Rina. Riya was, however, concerned about getting a job. To have a beautiful, dignified life, one needs a job. Riya could not cross the BCS interview boards twice. She did not take it up anymore after getting a job in the hospital. She was first posted to Jashore. Her father did not agree with this first, but later he consented. Riya felt so relieved! She felt suffocated by Dhaka, for all her dreams turned into a total nightmare! Those awful timesof her life she spent, all alone. Rina too got married after a while; in her trying times, all alone, she had to comfort herself.

Since that day, Riya has not been to the hospital. She stayed at home, keeping updates of Shamik’s conditions; and everyday Shamik’s mother at least once asked about Riya’s whereabouts. Riya stayed at home, talked to herself, relentlessly trying to forget the past. By the time she could decide to forgive or not, Shamik was already beyond everything— dead. Thinking whether to brood over Shamik or not, Riya gazes at the sky.A gentle breeze blows in the cloudless April sky, as if to say it may rain tomorrow or today. Riya waits for the rain, so eagerly, for she likes rain very much. 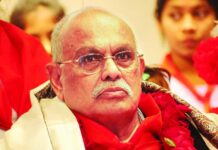 Our Abdul Gaffar Chowdhury no more 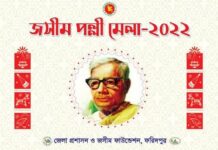 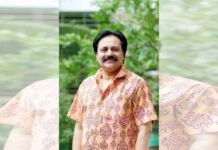