“We’re an independent and sovereign State. We decide our foreign policy,” he told reporters, a day after Chinese Ambassador in Dhaka Li Jiming commented Beijing would not like Bangladesh to join the grouping, reports BSS.

Momen called the comment “very unfortunate” and “aggressive” adding that he never heard such aggressive comments from any Chinese diplomat before.
“We didn’t expect such behavior from China,” he said.

A senior foreign ministry official earlier, preferring anonymity, said Dhaka so far expressed no interest about the QUAD while nobody either approached Bangladesh to join the platform.

The minister’s comment said a day after the envoy in a media interaction Bangladesh’s relations with China would “substantially be damaged” if it joins QUAD which he described as “a military alliance aimed against China’s resurgence and its relationship with neighbouring countries”.

India, Japan and Australia are members of the US-led strategic alliance called QUAD.

Momen, however, said any country could point out its position or views and being Beijing’s representative the Chinese ambassador could voice his country’s position while “we will listen what they say but will take any decision consideration what is good for us”.

“Bangladesh maintains a non-aligned and balanced foreign policy and it will decide what to do in line with that principle . . . (yet) Dhaka see with respect what others say,” he said.
The foreign ministry official supplemented Momen saying “The (Chinese) ambassador’s comment appeared a little ‘provocative’, which we could not welcome”.

He, however, said Chinese defense minister General Wei Fenghe during a Dhaka visit last month explained his country’s attitude towards QUAD when “we (Bangladesh side) listened to them but didn’t make any comment”.
The senior diplomat said Dhaka followed a policy of striking a balance in its relations with China and India keeping in mind the tensions between the two countries but “we are not subservient to anyone”.

“We will continue it (the policy) for our economic benefit,” he said.

The Chinese envoy said QUAD was a “narrow-purposed” geopolitical clique, and Bangladesh should not join it, since it will not derive any benefit from it.

The envoy was speaking at a virtually-held programme with members of Diplomatic Correspondents Association, Bangladesh (DCAB). 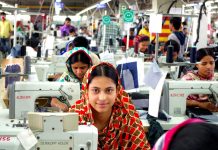