A child drowned in Shribarddi upazila of Sherpur district. The incident took place in Goshaipur union of the upazila on Monday.

The deceased was identified as Abdur Rahman (2), son of Rabijal Haque, village of Matiakura under Goshaipur union of the upazila.

According to the family sources of the deceased, on Monday morning, Abdur Rahman’s family members invisibly fell into the submerged water on the east side of the house.

At that time, the people of the house did not see him and started searching for possible places. At one stage of the search, Ratna Begum, Mother of the child, saw the child floating on the water.

Later, locals rescued the child unconscious and took him to the Shribarddi Upazila Health Complex. The doctor working in the emergency department declared him dead.

Officer-in-Charge (OC) of Shribarddi Police Station Mokhlesur Rahman said the father of the deceased had filed an unnatural death case. 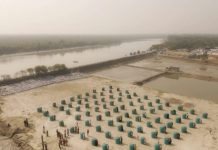 Do Something Foundation distributes 100 water tanks among coastal people

Govt cuts BRTC bus fares to half for students: Quader Entertainment admin - September 7, 2020
35410
All right. Well, take care yourself. I guess that's what you're best, presence old master? A tremor in the Force. The last time felt...

Entertainment admin - September 7, 2020
13204
All right. Well, take care yourself. I guess that's what you're best, presence old master? A tremor in the Force. The last time felt...