Dhaka Metropolitan Police (DMP) is celebrating its 46th founding anniversary today (February 13) on a small scale in view of the coronavirus pandemic.

On the eve of the day, President Md Abdul Hamid and Prime Minister Sheikh Hasina gave separate messages greeting all members of DMP.

In his message, President Abdul Hamid recalled with respect the martyrs of Bangladesh Police, who sacrificed their lives in the War of Liberation and different other periods to maintain law and order, reports BSS.

He said the members of Bangladesh Police had first put up armed resistance against Pakistani occupation forces at Rajarbagh Police Lines on the black night of March 25 in 1971.

Mentioning that police plays a vital role in establishing rule of law, the President said DMP’s one of the major duties is to ensure public order and safeguard the life and property of the people in the capital. He said DMP is playing an effective role in curbing terrorism and militancy along with controlling abuse of drugs in the capital.

Particularly, CTTC unit of DMP attained accolades at home and abroad in curbing terrorism, he added.

Abdul Hamid said DMP has made commendable contributions to ensuring social distancing and public safety in the wake of the outbreak of global coronavirus pandemic.

The president hoped that DMP would continue its sincere efforts to provide expected services to the city dwellers to attain their confidence.

Prime Minister Sheikh Hasina, in her message, said the members of Bangladesh Police had first put up armed resistance against Pakistani occupation forces on the black night of March 25 in 1971 responding to the call of the greatest Bangalee of all time, Father of the Nation Bangabandhu Sheikh Mujibur Rahman.

She said the Father of the Nation had taken various initiatives to build police force as a pro-people one just after the independence.

The premier said Bangabandhu had taken initiatives to extend services of police up to union level.

“Since our victory in the 2008 general elections by getting people’s absolute support, we have been taking and implementing multifaceted steps to modernize police force as we stay in power consistently,” she said.

She said her government has increased budget and manpower of police massively to build Bangladesh Police as an efficient and professional force.

She mentioned that a total of 82,231 posts including 1501 cadre posts have been created in the organizational structure of police in the last 12 years. “Besides, we have increased number of women police personnel, added advanced technology, imparted training at home and abroad, formed specialized new units and provided time-befitting modern equipment. As a result, the service of people become easier and pro-people,” she said. She appreciated the continuous efforts of Dhaka Metropolitan Police as the largest unit of Bangladesh Police in ensuring security in the capital with professionalism, efficiency and the use of modern technology as per the expectations of the city dwellers.

The prime minister said members of police at different levels laid down their lives to provide services to the people during the ongoing coronavirus pandemic.

She recalled with profound respect the sacrifice of valiant and patriotic members of police force in all crisis periods of the nation. She hoped the members of police force will play more effective role in implementing the government’s Vision 2021 and Vision 2041 imbued with the spirit of Liberation War to build a Sonar Bangladesh as dreamt by Bangabandhu.

Marking the anniversary, a discussion and cultural function will be arranged at Rajarbagh Police Lines in the evening tomorrow.

Dhaka Metropolitan Police (DMP) came into being on 1st February, 1976. 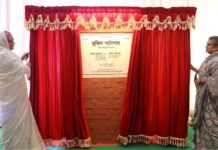 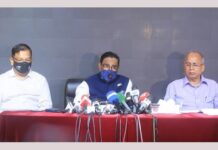